A biography of the playwright

Tom Stoppard was born Tomas Straussler in Zlin, Czechoslovakia, on July 3, 1937. However, he lived in Czechoslovakia only until 1939, when his family moved to Singapore. Stoppard, his mother, and his older brother were evacuated to India shortly before the Japanese invasion of Singapore in 1941; his father, Eugene Straussler, remained behind and was killed. In 1946, Stoppard's mother, Martha, married British army officer Kenneth Stoppard and the family moved to England, eventually settling in Bristol.

Stoppard left school at the age of seventeen and began working as a journalist, first with the WESTERN DAILY PRESS (1954-58) and then with the Bristol EVENING WORLD (1958-60). Having developed a specialization in film and theatre criticism, in 1960 Stoppard became a free-lance journalist, writing critical articles and, for the DAILY PRESS, two pseudonymous weekly columns. By the end of the year, he had completed his first full-length play, A WALK ON THE WATER (later produced on stage in 1968 as ENTER A FREE MAN), and acquired an agent, Kenneth Ewing of Fraser and Dunlop Scripts. He also wrote a one-act piece, THE GAMBLERS, which was eventually performed by the University of Bristol drama department in 1965. Stoppard has referred to this as his 'first' play in that he claims A WALK ON THE WATER was an unoriginal composite of several plays he admired. Over the next few years, Stoppard wrote various works for radio, television, and the theatre. Among these were "M" IS FOR MOON AMONG OTHER THINGS (1964), A SEPARATE PEACE (1966), and IF YOU'RE GLAD I'LL BE FRANK (1966). A WALK ON THE WATER had been broadcast on ITV Television in 1963 and on BBC-TV in 1964, and Stoppard wrote many episodes of the radio serial A STUDENT'S DIARY: AN ARAB IN LONDON (1966-67). In addition, three short stories were published by Faber and Faber in the anthology, INTRODUCTION 2: STORIES BY NEW WRITERS (1964).

From September 1962 until April 1963, Stoppard worked in London as a drama critic for SCENE, writing reviews and interviews both under his name and under the pseudonym William Boot (taken from Evelyn Waugh's SCOOP). In 1963, he began writing his only novel, LORD MALQUIST AND MR. MOON. The names Boot and Moon recur in many of Stoppard's works, generally with Boot being a character who makes things happen and Moon being a character to whom things happen.

While participating in a colloquium sponsored by the Ford Foundation in Berlin in 1964, Stoppard wrote a one-act play that later became ROSENCRANTZ AND GUILDENSTERN ARE DEAD. The play, which focuses on two minor characters from HAMLET, examines the ideas of fate and free will. In August 1966, ROSENCRANTZ AND GUILDENSTERN ARE DEAD was performed by Oxford University students as part of the Edinburgh Festival fringe, and, at the same time, Stoppard's only novel was published; to Stoppard's surprise, it was the play that succeeded, establishing his reputation as a playwright. When the play, having caught the attention of Kenneth Tynan, was performed by the prestigious National Theatre Company at the Old Vic in London in 1967, it received immediate and widespread acclaim. Stoppard, at age 29, was a major success.

Of Stoppard's plays written over the next ten years, JUMPERS, produced in 1972, and TRAVESTIES, produced in 1974, are among the best known. DIRTY LINEN AND NEW-FOUND-LAND (1976) was written for Ed Berman, founder of the Inter-Action community arts organization, on the occasion of his being granted British citizenship.

By 1977, Stoppard had become concerned with human rights issues, in particular with the situation of political dissidents in Eastern Europe and the Soviet Union. In February 1977, he visited Russia with a member of Amnesty International. In June, Stoppard met Vladimir Bukovsky in London and travelled to Czechoslovakia, where he met Václav Havel. Stoppard became involved with INDEX ON CENSORSHIP, Amnesty International, and the Committee against Psychiatric Abuse and wrote various newspaper articles and letters about human rights.

Stoppard's political concerns surfaced in his work. EVERY GOOD BOY DESERVES FAVOUR (1977) was written at the request of André Previn and was inspired by a meeting with Russian exile Viktor Fainberg. The play, about a political dissident confined to a Soviet mental hospital, is accompanied by an orchestra using a musical score composed by Previn. PROFESSIONAL FOUL is a television play that Stoppard wrote over a period of three weeks as a contribution to Amnesty International's declaration of 1977 as Prisoner of Conscience Year.

In addition to his original stage plays, Stoppard has written original screenplays, teleplays, and radio plays, as well as adaptations for the stage and screen. His screenplay of BRAZIL, coauthored by Terry Gilliam and Charles McKeown, was nominated for an Academy Award in 1985. Other well-known screenplays by Stoppard include EMPIRE OF THE SUN (1987, adapted from the novel by J. G. Ballard), THE RUSSIA HOUSE (1989, adapted from the novel by John le Carre), and BILLY BATHGATE (1991, adapted from the novel by E. L. Doctorow), as well as a film version of his own ROSENCRANTZ AND GUILDENSTERN ARE DEAD (1991). Stoppard also sometimes reads and contributes to scripts by other writers as favors to directors Kathleen Kennedy, Mike Nichols, and Steven Spielberg. Among teleplays by Stoppard, the best known is SQUARING THE CIRCLE: POLAND, 1980-81, a fictional documentary about the history of Solidarity.

THE DISSOLUTION OF DOMINIC BOOT (1964), Stoppard's first radio play, was the basis for his teleplay "The Engagement" (1970). ALBERT'S BRIDGE, produced by the BBC in 1967, has been called Stoppard's finest radio play.

Tom Stoppard has established an international reputation as a writer of "serious comedy"; his plays are plays of ideas that deal with philosophical issues, yet he combines the philosophical ideas he presents with verbal wit and visual humor. His linguistic complexity, with its puns, jokes, innuendo, and other wordplay, is a chief characteristic of his work.

Stoppard has been married twice, to Jose Ingle (1965-72), a nurse, and to Miriam Moore-Robinson (1972-92), the head of a pharmaceutical company, and he has two sons from each marriage. 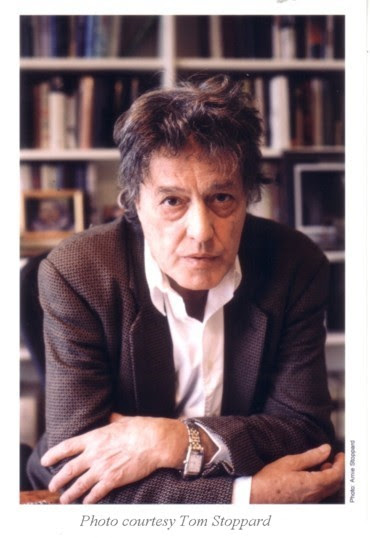 Welcome to the weblog for Seattle Public Theater's production of Travesties by Tom Stoppard.

Below you will find an archive of all the entries, where you can navigate to what you are interested in. If you have any questions, or would like further information on any of the topics, I encourage you to post a comment to a particular entry. My contact information is also on the sidebar.